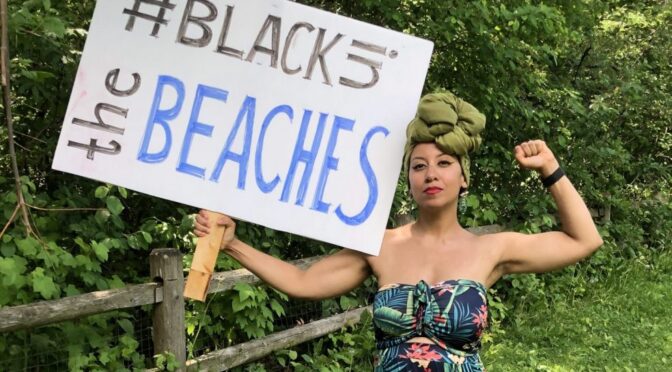 I’ve been doing volunteer work and activism for a decade now, but my wife Sapphira Charles’ newfound activism is putting me to shame.  It’s been very encouraging watching her go from 0 to 100 in the space of a couple months, and becoming a voice in our community and someone to rally around.  Through her actions the last few months I’ve witnessed such a saga of both devastating racism, alive and well at home and abroad in 2020, and uplifting unity and humanity, as our communities came together in support.

My wife had never attended a protest or rally before this year, but CoVID had us all reevaluating our lives and she felt moved by all the furor around the injustice of George Floyd’s murder. Her first ever march was the Black Lives Matter march downtown on May 30, 2020. Well that seemed to light a spark inside her and fostered a newfound solidarity with her fellow black community.

Then a woman from the Beaches decided to have a Black Lives Matter march for George Floyd.  Well, being a white woman, she thought she’d best practise some due diligence and contact our closest BLM group.  This happened to be a Toronto student group of BLM (BLM across the continent is not a cohesive centrally-controlled group) who strangely told the woman NOT to have the protest.

For some reason they felt being a white woman in a predominantly white neighbourhood that she should not lead the protest march, even going so far as to suggest a white neighbourhood was not the place for it.  They also indicated in general BLM groups are discouraging protests because of the potential for violent opposition from white power groups.  But that’s an issue happening in the US, nowhere in Canada has seen such developments.  However, feeling it wasn’t her place, she cancelled the march.

Well my wife would have none of it!  I had helped Sapphira prepare for the protest, lending her my reusable protest sign (dry erase marker on corrugated plastic, sturdy and you can reuse forever) and she was all geared up to go and totally deflated when it was cancelled via Instagram a mere 2 hours before the event.

We both agreed that a predominantly white neighbourhood is precisely where a march is needed, and if being led by a black person was what was missing, Sapphira surely fit the bill.  So she jumped on it, communicated with the woman who was going to run it, re-promoted the event, and together we whipped up some speeches and devised some chants.  In the space of two hours she went from being about to attend her second protest march ever to leading her first protest ever.

Sapphira did really well, surprising herself and me with her orating.  She spoke strongly, with passion and intensity.  Most people would not have guessed she’s a hard core introvert who detests public speaking.  Arriving at the Kew Gardens gazebo at the end of march, a few people said some words and shared their stories, and gave thanks to my wife for ensuring the march stayed alive.  Beach Metro covered it here. But as the march was so last minute many people were clamouring for another one so they could attend too.

So began my wife’s foray into full-blown activism.  She set up another protest, started the Facebook group #BeachersforBlackLives, and we started preparing.  This time we were going to get my parents to watch our toddler son, he didn’t last really well through the first one.  Sapphira wrote a more comprehensive speech, we procured a megaphone, and she formally organized speakers this time.

The first protest maybe had a hundred+ people, the second was definitely 300+ and a smashing success.  After safely marching the same route, from Williamson Rd school, down Glen Manor, across the boardwalk, and up to Kew Gardens gazebo, the speakers related their own very personal experiences with racism, some of whom grew up in the Beaches and suffered through racist incidents here.  It was a very powerful display, and speakers couldn’t thank my wife enough for the opportunity to speak their truth to an attentive sympathetic audience.

Well, I should have known that wasn’t the end of my wife’s budding activism.  Motivated by the growing membership of the Facebook group and making connections in the racialized community of East York, she found herself being invited to talk at other events and participate in other groups.

A horrible racist incident happened in Dentonia Park, when an interracial couple were assaulted and called racist insults by a disgruntled white man.  If that wasn’t bad enough, the police refused to investigate the assault.  So another protest sprung up in front of 55 Division, and they asked Sapphira to speak.  She gave another rousing speech and further entrenched herself as a local activist.

But it doesn’t end there!  A new Instagram group sprung up, seeming to mirror the #BeachersforBlackLives Facebook group, and was holding their own protest starting at Leuty Lifeguard house.  Sapphira was a bit confused at this seeming competing group, and couldn’t understand who they were or why they wanted to hold yet a third protest march in the area.

Upon investigating the group she found out it was a couple of young female students who used to live in the area and they had no idea there was another group or that previous protests had happened.  In fact, they seemed to start the whole thing on a lark and weren’t sure how to organize their march.  Cue Sapphira, in for the save again.

Due to my extensive experience with protests and rallies I kept asking Sapphira questions about the plans for the protest, and found the students had never really done anything like this before.  Sapphira took the reins a bit, coached them in some of the details they needed to cover, and even arranged for the police to escort the march down Queen St.

The young women, well-meaning to be sure, never thought to request a police escort, yet were planning to block Queen St to march the entire length of the Beaches from Woodbine to RC Harris.  Despite being rookies off to a shaky start, with my wife’s help the young protesters managed to get even more solidarity out of the Beaches.

At this point Sapphira was firmly on the inside of black activism in the Beaches.  She was part of the Community Solidarity Against Racism in Construction (CSARC) conversations about the nooses left on the construction site of Michael Garron Hospital, eventually culminating in a zoom call with the mayor.

Side note, when Ellis Don erected a plaque claiming a “commitment to inclusive diversity” I immediately looked on their website to see just how “diverse” their company was and created the following graphic to expose their hypocrisy:

Sapphira also joined the steering committee planning an event in Dentonia Park to counter the racist assault incident there.  If only this story ended here, but racism reared its ugly head in our neighbourhood again.

A young black boy playing with a Nerf gun in Ivan Forrest Gardens on Queen St had the police called on him.  Eight officers stormed the small park, startling and shocking the boy and his mother.  They referred to the boy as a “suspect”, but then thankfully backed down quickly when they saw the truth.

The real question is:  how does anyone mistake an 11-yr old boy with a neon Nerf gun as some kind of armed threat?  A police officer in my family suggested the police should look into charges of public mischief and coveting a false message by means of telecommunications for the caller.  The police have been investigating, and have identified the caller as someone local.  I’d just love to have the person outed and shamed to the point they never show their racism again for fear of the public outcry.

Another local black mom who was appalled by the story decided to hold a Nerf gun fight in the park to show just how silly the 911 call was.  My wife followed it up the next week with a dance party!  “Love in the Park” is all about dancing out our fears and embracing love, showing solidarity and respect for each other in the most universal way humans interact with music.  Global was there and she got on the 6:00 news.

Not long after came the Dentonia Park event.  My wife wanted to do some artivism for the event, some kind of banner with a message, and my suggestion was put up some treated plywood on the fence ringing the park, put a message in masking tape, have the community paint over it, and then reveal the message.  Well the event kinda took a few twists and turns, there was a lot of discussion on where to hold the event (Dentonia Park is large) and decisions about appropriate materials, and in the end it was done on Tyvek that had grommets added to it.  Not the ideal material to attach to a fence on a windy day but in the end it held up and the result was quite stunning.

Well the banners didn’t last 24 hours, the next day they were completely ripped off and found in a nearby dumpster.  The organizers banded together and put them up a second time, just to have them ripped apart and scattered this time.  At first it seemed like a hateful response to the messages of love, but it turns out the fence they used was part of a cricket field, and the posters blocked the view for spectators that would use the benches there.  So it’s impossible to say who trashed it when for what reason, but at least we have all the pictures and video to remember it by. Now Sapphira is heading the permanent art installation/mural for Reclaim Dentonia, and also a jury member for the Leuty Boathouse mural project.

The past few months has seen Beaches-East York prove that when racism rears its ugly head, and it still frequently does, we band together against it.  My wife has found her voice in the tumult, and with the help of allies they are uniting more and more people. Let’s keep up the pressure and good vibes and ensure that it’s clear the Beaches will NOT tolerate racism, bigotry, or discrimination.